Ten engines of unusual design were built by Messrs. Longridge & Co., and delivered to the railway company during the years 1851 and 1852, though it appears that they were actually ordered prior to Mr. Sturrock’s assumption of office on the line.

They were of practically the same type as the well-known “Folkestone” of the South-Eastern Railway, and were built in accordance with one of Mr. T. R. Crampton’s patents, a principal feature of the design consisting in the boiler resting upon three points: the centre of a cross-spring, which bears upon the axleboxes of the driving wheels at the back of the firebox, and one on each side in the front, on compensating springs, each of which springs bears upon the two axleboxes of the small supporting wheels.

In the case of the G.N.R. engines, the large reversed springs at each side, which, in the original specification spanned the interval between the two sets of leading wheels, were not employed, each of the four leading axleboxes having its own spring, with equalizing levers between the two on each side, this method of suspension being, for all practical purposes, the same as that above quoted.

An important feature of the design consisted in the use of inside cylinders, which necessitated the employment of a “dummy” crank axle in front of the firebox, with outside cranks coupling it to the driving wheels at the extreme rear of the engine.

The illustration of No. 91 as here given. Fig, 13, shows the general external appearance of these engines as originally built. They were speedily found, however, to be wholly unsuitable for the service they were intended to work, one very vital reason undoubtedly being the small proportion of weight available for purposes of adhesion, consequent on the position of the driving wheels. Mr. Sturrock, therefore, undertook the task of altering the arrangement of wheels to a more usual design, and in course of time they were all modified to the condition shown in our second illustration of No. 91, Fig. 14, in which the driving wheels are shown in the normal position, with the crank axle in front of the firebox casing, one pair of the carrying wheels being removed from the front of the engine to a more suitable place immediately behind the firebox. In this form the engines had outside bearings to all the wheels, and the driving axle had inside bearings as well. 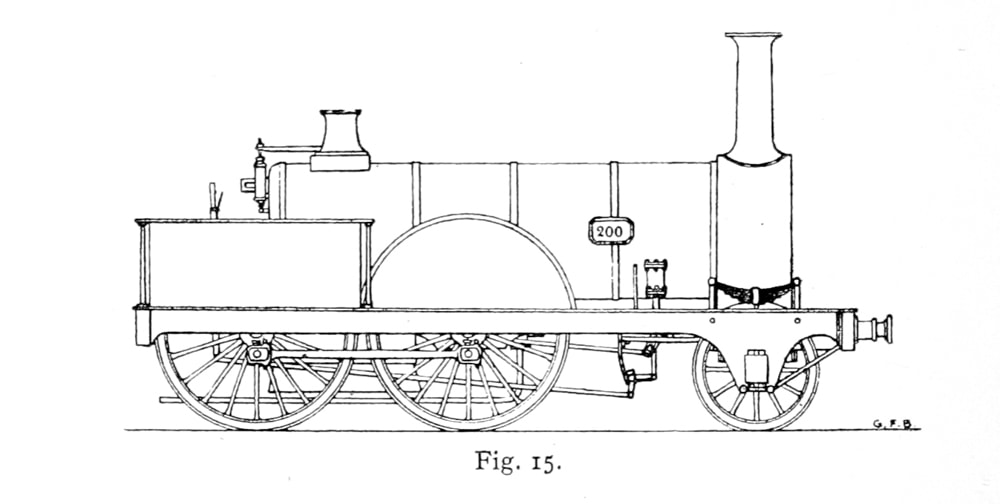 One of the engines, No. 200, passed through an intermediate stage, which is shown in the accompanying illustration. Fig. 15, being for a short period a four-coupled engine, having in its outside appearance a strong resemblance to the handsome coupled engines afterwards put upon the line by Mr. Patrick Stirling; but this form only existed for a comparatively short period, and the engine was subsequently reconstructed in the single driving form to which the others had been transformed.

In their new condition these ten engines became known as the “converted Cramptons,” and did excellent service for many years.

Some or all of the description has been edited from G.F.Bird's Locomotives of the Great Northern Railway

There is a preserved Crampton at the Cité du Train, in Mulhouse, France, and the Crampton Locomotive Trust is looking to build a new one.

Images from the Collection

This gallery is for members only. If you have a membership, please log in. If not, you can definitely get access!

The Society's photograph collection is for members only. You can join us, or renew your GNRS membership online and gain instant access to all of the members' pages, your six issues of the Great Northern News, back issues, days out, and more.
Find Out More