Robert Hawthorn first began business at Forth Bank Works in 1817, building marine and stationary steam engines. In 1820, his brother William joined him and the firm became R and W Hawthorn. Possibly after having attended the Rainhill Trials in 1829, they became interested in locomotives, and sold their first engine in 1831. Printed and online sources claim this to be Mödling for the Vienna Gloggnitz railway. That is wrong, that locomotive was delivered in 1841. The 1831 order was placed by the Stockton and Darlington Railway.

There followed a number of orders for the Stockton and Darlington Railway. They were great innovators – not always successfully – and their locos had many original features.

In 1838 two were built for the broad gauge Great Western Railway to the patent of T.E. Harrison, who later became the chief engineer for the North Eastern Railway. These could be viewed as the forerunners of the Garratt, with the boiler carried on a separate carriage to the cylinders and valvegear. This allowed the boiler to be large and low down, being carried on smaller wheels, while the driving wheels could be up to ten feet (120 in; 3,048 mm) in diameter. With little weight on the drivers, adhesion was poor, but they ran very smoothly up to sixty miles per hour (97 km/h). However, the flexible steam coupling gave a great deal of trouble and they were withdrawn.

They continued to build more conventional engines, possibly under sub-contract, among them, three for the Birmingham and Derby Junction Railway. In 1850 the company built their first tank locomotive which was supplied to the York, Newcastle and Berwick Railway In the 1850s, they also built six 4-4-0ST, Crampton locomotives of the Sondes class for the East Kent Railway. Also, in the quest for a low centre of gravity, four 0-4-0s with the drivers spaced at twelve feet (144 in; 3,658 mm) apart connected to the cylinders by a dummy crankshaft. These were soon withdrawn, and the Cramptons rebuilt into traditional 2-4-0 tanks. 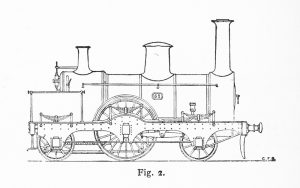